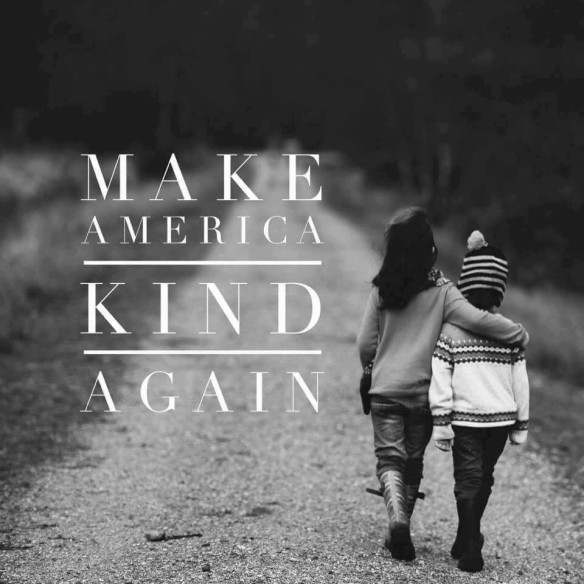 A member of the church I pastor, The Venues, gave me for Christmas this year, “Dr. Seuss’s You Are Kind.”  The book is an ode to Kindness.

The book both humbled me (it is a “thank-you” book) and challenged me – to everyday, in every way, be kind.

Just a few days ago we were singing “Silver Bells” that has this insightful line: “In the air there’s a feeling of Christmas.”

We live and move in an atmosphere.

We breathe in and breathe out certain types of air.

Today, there is a feeling of meanness.

We move in it.

America is becoming a meaner place.

Hate crimes have soared. Americans have become more polarized.  Average Americans say and do things to people they disagree with that in a different time would have been unthinkable.

Congresswoman Debbie Dingell (D-MI) reminded us of that different time when she released a letter written by her late husband, Congressman John Dingell, upon the death of George H.W. Bush.  She released the letter as a response to the “Maybe he’s looking up, I don’t know” slur that was made about her deceased husband, inferring that he maybe was in hell instead of heaven.

Here is an excerpt of Mr. Dingell’s letter:

“George Bush came from a time (as did I) when we believed that American equality demands that we treat one another with the same dignity and respect with which we expect to be treated. He was horrified at the harshness our national discourse has taken and deeply disturbed at watching too many people speak past each other. We both shared deep concern about the hateful taunts, the despicable actions and language that plague our political culture.”

What can we do to improve the atmosphere?

Congresswoman Dingell gave an answer to that question when she introduced the release of her husband’s letter:

“As an antidote to the last week, I found John Dingell’s own words from last December. He was alive at the time and wrote these words about his friend George H.W. Bush. His words were about him and his friend, who both worried about the direction of this country. Happy Holidays and may we take their message to heart.”

“An antidote” to the poison of meanness is kindness.

Denise and I went to the movies Christmas night and saw “Little Women.”  I really liked it. Seeing it made me want to read the book. In the book version, there is this exchange between Amy and her mom:

Amy: “Because they are mean is no reason why I should be.  I hate such things, and though I’ve a right to be hurt, I don’t intend to show it…”

Marmee (Mom): “That’s the right spirit, my dear; a kiss for a blow is always best, though it’s not very easy to give it sometimes.”

The author, Louisa May Alcott, added that Marmee said this “with the air of one who had learned the difference between preaching and practicing.”

Marmee is right.  It’s easier to preach kindness than practice kindness.  I should know!

Here’s my plan for changing the atmosphere.

-Spend more time contemplating Jesus.  My dad used to say, “You become like that to which you pay attention.”

-Live in that atmosphere of the Spirit of the Christ.  Breathe it in. That’s the only way to breathe it out. “Walk in the spirit and you will not do what your old self desires” (Galatians 5:16).

-Choose not to perpetuate the cycle of meanness.

-Give a kiss for a curse.