God was a major player in last night’s Super Bowl game between the Baltimore Ravens and the San Franciso 49ers.  According to one of the commercials, God made a farmer to sell Ram trucks. And according to Ray Lewis, God was cheering for the Ravens.

I’m not a big fan of the 49ers (I’m still upset over  “The Catch” of 1982 when Montana connected with Dwight Clark in the final minutes, beating the Cowboys), the Ravens (I don’t know why…I’m just not), nor Ray Lewis.  I am, though, a big fan of Paul Harvey and God.

The commercial was an appropriate hug of America’s farmers, delivered by Paul Harvey, taken from a 1978 speech at the Future Farmer’s of America convention.  Nothing against Chrysler, I’ve driven one, but I don’t think God gave us farmers so we’d buy a truck.

And then there’s Ray Lewis, the very talented and out-spoken linebacker for the Ravens.  He often wears his Christianity on his jersey so it was no surprise that in his post-game interview with Jim Nantz, Lewis gave a shout out to God, “It’s simple: when God is for you, who can be against you?”  Really Ray?

Is this how God works?  Ray and a bunch of Americans believe so.    A survey by the Public Religion Research Institute out last week found that more than half of Americans believe “God rewards athletes who have faith with good health and success.”  Asked if they believe God plays a role in who wins, 27% of Americans said “yes.”

On its cover last week, Sports Illustrated asked the question, “Does God Care Who Wins the Super Bowl”

The question of God’s role in sports is even seen in Peanuts:
Charlie Brown is caddying for Snoopy: “I find it strange that the golfing gods never allowed you to make a hole-in-one.  I wonder what that means?”  Snoopy: “It means we need some new golfing gods.”

If God influences which teams win championships and He rewards athletes who have faith with success, then God’s favorite team must be the New York Yankees (27 world championships) and He must really not like the Cubs.  And what about Tim Tebow?  Where did his faith get him?  Banished from the Broncos and now the Jets.

We’ve been taught that the fear of God’s wrath is what brings us to Him and to repentance.  That’s bad theology.  Here’s good theology:

“But when the kindness and love of God our Savior appeared, he saved us.  It wasn’t because of the good things we had done.  It was because of his mercy.” Titus 3:4-5

“God’s kindness is intended to turn you from your sin.” Romans 2:4

God is the major player in our lives.  God is for everyone, not desiring that any should perish 2 Peter 3:9. 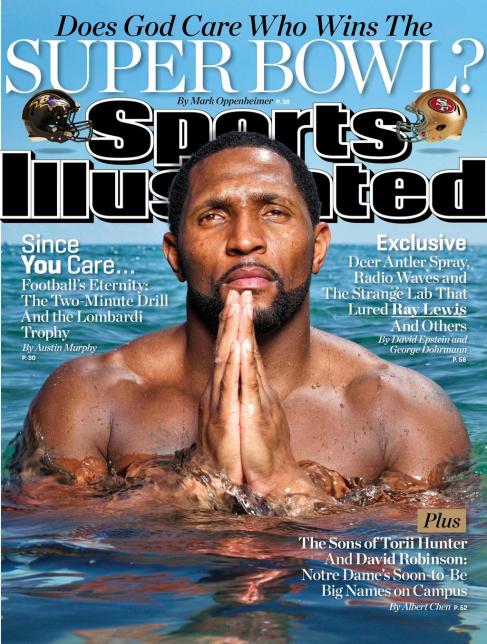 4 thoughts on “The Theology of Ray Lewis”