In the classic To Kill a Mockingbird, Scout has a bad day at school with her teacher and asks her dad, Atticus, for permission to stay at home and not return to school.

Atticus replies with these words of wisdom, “First of all, if you can learn a simple trick, Scout, you’ll get along a lot better with all kinds of folks. You never really understand a person until you consider things from his point of view?”

“Until you climb into his skin and walk around in it.”

Atticus gives us a great description of Christmas:

God climbing into our skin and walking around in it.

“…he took the humble position of a slave and was born as a human being. When he appeared in human form…” Philippians 2:7-8

God is not distant. God is not out of touch. God gets us. 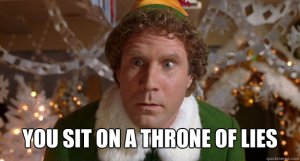 Christmas is the celebration of a God who gets us. A God who walks in our shoes.

Jesus knew what it was to have great friends.

Jesus knew what it was to be betrayed by friends.

Jesus knew what it was to be undervalued.

Jesus knew what it was to be the center of attention.

How different would the world be if we lived that way.

A grocery store check-out clerk once wrote to advice-columnist Ann Landers to complain that she had seen people buy “luxury” items – like birthday cakes and bags of shrimp – with their food stamps. The writer went on to say that she thought all those people on welfare who treated themselves to such non-necessities were “lazy and wasteful.” A few weeks later Landers’ column was devoted entirely to people who had responded to the grocery clerk.

One woman wrote, “I didn’t buy a cake, but I did buy a big bag of shrimp with food stamps. My husband had been working at a plant for 15 years when it shut down. The shrimp casserole I made was for our wedding anniversary dinner and lasted three days. Perhaps the grocery clerk who criticized that woman would have a different view of life after walking a mile in my shoes.”

Another woman wrote, “I’m the woman who bought the $17 cake and paid for it with food stamps. I thought the check-out woman in the store would burn a hole through me with her eyes. What she didn’t know is the cake was for my little girl’s birthday. It will be her last. She has bone cancer and will probably be gone within six to eight months.”

The clerk should have followed Atticus’ advice.

This Christmas, let’s celebrate the God who “gets us”.

1 thought on “Christmas: God Walking in Our Shoes”