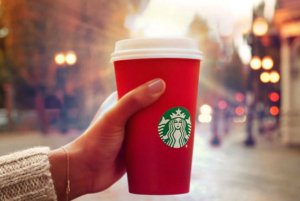 In the ongoing “War on Christmas” the secularists have fired the first caffeinated shot against the Baby Jesus. Have you heard? Starbucks hates Christmas. The coffee giant has unveiled its new holiday cup seen above.

No stars, reindeer, snowflakes or ornaments.

So clearly, they hate Christmas – and they hate Jesus.

So says, Joshua Feuerstein in a Facebook post that has been viewed over 11 million times. His exact words, “Starbucks REMOVED CHRISTMAS from their cups because they hate Jesus…SO I PRANKED THEM…and they HATE IT!!!

He’s not alone. Raheem Kassan on breitbart.com says that those of us who indulge in a delicious drink from Starbucks out of a plain red cup are being “told/reminded that this time of the year is no longer about Christmas.” It’s almost like he could see me rolling my eyes because he ends his column with, “And no, ‘I’m not reading too much into it’. This is happening. And it’s as disgusting as an Eggnog Latte.” Well, he doesn’t need to drag eggnog into it.

Are Mr. Kassan, Rev. Feurestein and those who agree with them “reading too much into it”? I think so. Here’s why:

-I think this is one more sign that some Christians in the USA have a persecution complex.   One Presidential candidate said “We are moving rapidly toward the criminalization of Christianity.” Really? Is there any movement to prevent us from worshipping Jesus? From following Him? From living like Him? From loving our enemies? From blessing those who insult us? Paul writes that the fruit of the Spirit, the evidence of living a Christian life  is “Love, joy, peace, patience, kindness, goodness, faithfulness, gentleness, and self-control.”  Then he ends with, “There is no law against these things.”  No chance of these attitudes and actions being criminalized.

I remember being taught in Youth Group to expect “persecution” for following Christ. I wonder if Christian culture has caused us to look at anything that doesn’t fit into our particular religious/moral/cultural box and see anti-Christian discrimination.

-Is Christmas really defined by what is written or not written on a cup? Isn’t it a better celebration of Christ’s birth and a better recognition of Christ to actually live like Him?

Isn’t it better to listen to and live out the angelic announcement of “peace on earth – good will toward men?”

So, buy yourself a coffee in a plain red cup.

Buy one for the person behind you.

Buy one for the person at the intersection holding a “Homeless” sign.

Do something “good” for others.

1 thought on “Christmas on a Cup?”