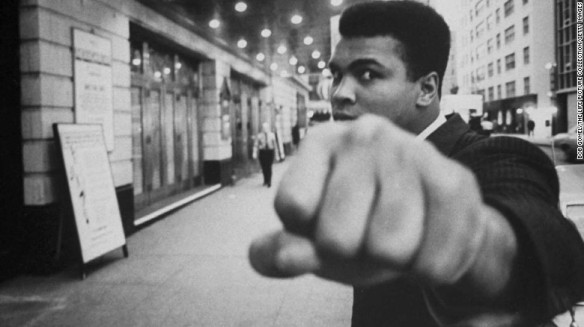 Why did Cassius Clay change his name to Muhammad Ali?

Why wasn’t he a Christian anymore?
And what is this Muslim religion he now followed?

Why would anyone walk away from Christianity?
Why were so many people mad at him?

In the blink of an eye.

Ali was the fastest heavyweight ever.  Those lightening fast hands and a pair of legs that moved around the ring like Fred Astaire made him a three-time heavyweight champion of the world.  He made a total of 19 successful title defenses.

What your eyes can’t see

Ali was a force in the ring and a force outside of it. It was outside of the ring that Ali stirred up so much controversy.

“Why should they ask me to put on a uniform and go ten thousand miles from home and drop bombs and bullets on brown people in Vietnam while so-called Negro people in Louisville are treated like dogs and denied simple human rights?”

“I ain’t got no quarrel with the Vietcong…No Vietcong ever called me N – -r….they never lynched me. They didn’t put no dogs on me…”
The Olympic gold medal Ali may or may not have thrown into the Ohio River:

Ali was refused service in a Louisville restaurant after he won an Olympic gold medallion Rome. One story says that Ali got so mad he threw his medal into the Ohio River.  Later, Ali said he just lost it.  Ali recounted the story here:

“I done whipped the world for America.  I took my gold medal and said, ‘I know I’m going to get my people free now.  I’m the champion of the whole world. I know I can eat downtown now.’  And I went downtown that day, with my medal on, and went in arestaurant.  Things weren’t integrated then and black folks couldn’t eat in the restaurants downtown, and I sat down, and order a cup of coffee and a hamburger and the lady said, ‘We don’t serve Negroes.’  I was so mad, I said, ‘I don’t eat ‘em either. Just give me a cup of coffee and a hamburger.’  I told her, ‘I won the gold medal. I fought for this country and won.  I’m going to eat.’  She talked to the manager and I had to leave that restaurant in my hometown, where I went to their church and served in their Christianity, and daddy fought in all the wars, and could’t eat in their restaurants.  And I said, ‘Something’s wrong.’  And from then on, I’ve been a Muslim.’”

Before he was a Muslim, Ali was a Christian, of the Baptist variety.  But he dropped Christianity and picked up Islam.

Being the son of a Baptist pastor and living in a world that revolved around Christianity and the church, this really bothered me.

Rather than looking down at Ali, as was done, maybe we should be looking hard at ourselves.

Look hard at the racism in the southern Christian churches. The prevailing orthodoxy was that non-whites were inferior spiritually, morally, and mentally. Racism remained longest where Christian belief was the strongest.  It was not bishops or preachers but freethinkers, secularists, and atheists intellectuals who spread the idea that all should be treated equally.

Ali said, “I chose to follow the Islamic path because I never saw so much love, so much people hugging each other…As a Christian in America I couldn’t go to the white churches.”

At the Muhammad Ali Center in Louisville, you will see this drawing by Ali, contrasting his experience of the difference between Islam and Christianity.  It speaks for itself: 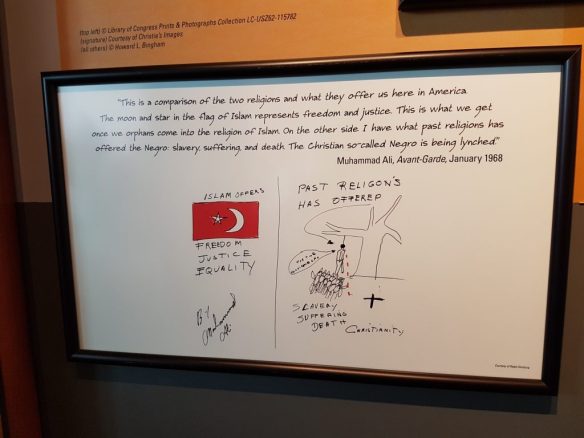 In the book, The Christ and the Indian Road, by E. Stanley Jones, the author tells about asking Gandhi how to naturalize Christianity into India.  Gandhi answered, “I would suggest first of all that all of you Christians, missionaries and all, begin to live more like Jesus Christ.”

I wonder if the story of Cassius Clay would have been different had Christians lived more like Jesus Christ. I wonder if I’m pushing anyone away from Christianity because I’m not living like Jesus.

I’ve heard it called the United States of Amnesia.  We must not forget how our past, present and future are woven together.

The Southern Baptist Convention (SBC) was founded in 1845 after Baptists in the North and the South clashed on the issue of slavery.  The SBC has been known for backing slavery then and in more recent history, racism.  In 1995 the SBC apologized for supporting racial injustice, for “condoning and or perpetuating individual and systemic racism in our lifetime, and we genuinely repent of racism of which we have been guilty, whether consciously or unconsciously.”

1 thought on “From Cassius Clay to Muhammad Ali”