What do you see when you look at the above pic of Col. Sanders?

2.  The KFC founder with a big head and a tiny stickman body?

The original KFC logo with the pic of the Colonel came out in 1952.

I was born in 1956.  Until today, I have looked at that pic and seen option 1 – The Colonel with a cool tie.  Today, someone pointed out to me option 2.

They’re right.  It does look like a big head with a tiny stickman body.

I can’t unsee it.

What that person did with Col Sanders, Jesus does with life.  Jesus didn’t draw pictures but he told picture-stories. We call them parables. Jesus used parables to not only help us see things more clearly; but more often than not, his parables were told to help us see things differently!

When Jesus finished his stories, people found themselves slapping their foreheads and exclaiming, “Wow!  I’ve never thought of it that way!”

Let me give you a “for instance.”  It’s recorded in Luke 10:25-37.  Jesus is in a conversation with an expert in the Law of Moses, who asks Jesus a fundamental question, “What must I do to inherit eternal life.”  As far as questions go, it doesn’t get any bigger than that!

The answer given by Jesus isn’t found in most “Gospel Tracts”:  Love God and love your neighbor as yourself…Do this and you will live.”

Out of this came another question from the Lawyer: “Ok, then, who is my neighbor?”

Luke says the Lawyer was trying to “justify himself”  – “looking for a loophole, he asked, ‘And just how would you define neighbor?’” is how “The Message” puts it.

The religious expert was trying to determine who he did and did not have to love.

So, Jesus told a story.  We call it “The Parable of the Good Samaritan.”

Isn’t it interesting that, in answer to the question, “Who is my neighbor?” Jesus does not give a straightforward answer?

He could have handed the lawyer a list of people to love.

He could have given a catalogue of characteristics to look for in people whom he should love.

Instead, he tells a story.

A story is ambiguous.

These are interesting times.  Some familiar landmarks have shifted and some people are anxious, worried, scared, angry. They want unambiguous, straightforward answers.

And Jesus tells  a story.

We don’t always like to look at something in a new way.   We like the old way.  The way it looked before.

The original hearers of Jesus’ story were not just surprised.  They were shocked.  The hero of the story is not a person of their own race or religion.  He’s a Samaritan!

“What?  Did you hear that? Can you believe he said that?  A Samaritan?!  Come on now!  This is too much.  He’s really crossed the line this time.  He’s been in the sun too long.  He stayed too long with the wine at that wedding.”

It was, for them, a new way of thinking and seeing.

But it’s His way.

I hope His way is all I will ever see. 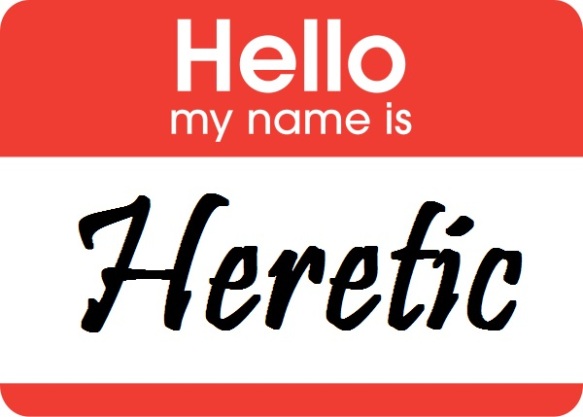 They talked about terrorism.

They talked about refugees.

They talked about ISIS (He’s causing them fits.)

They talked about how “think tanks” in the West think “they know us better than we know ourselves.”

They talked about Islam.

You can read the interview here.

I learned a lot. But this is the biggie.

The King said this about Islam:  “…in Islam, us traditional Muslims, it is not our right to call people heretics.  God decides at the end of the day.  The jihadists take it upon themselves to call the rest of us heretics…”

Did you catch that?  “In Islam, it is not our right to call people heretics.  God decides at the end of the day.”

That hit home with me.

I’ve been called a heretic more than a few times.

Christians throw the “heretic” word around like pizza chefs throw pizza dough. Hold a view that differs from some Christians?  Watch out for the “H-bomb!

You’ve heard of “witch hunts?”  This is a heresy hunt.

The first heresy hunters were members of the ancient tribe of Manasseh called Gileadites.  There had been a longstanding feud between them and the Ephraimites in northern Israel.  To make sure no undesirables got into their camp, the Gileadites set up a check point at the fords of the Jordan River.  They challenged anyone trying to cross the river to say the password: “shibboleth.” The Ephraimites, no matter how hard they tried, just could not properly pronounce the word.  It always came out “sibboleth.”  When that happened, the Gileadites would cut off their heads.  All because they couldn’t pronounce the “sh” sound. I know: Crazy.  Check it out for yourself here.

Over the centuries the church has continued chopping off heads of people who didn’t say something the “right” way.

Iraenaeus, the Bishop of Lyons in the 2nd century, claimed there was only one proper Church, outside of which there could be no salvation.  Other Christians were heretics and should be expelled, and, if possible, eliminated – killed.

By the 5th century there were over a hundred active statutes in the Roman Empire concerning heresy.  From Augustine onward,  most theologians agreed that heretics should be persecuted.  Thomas Aquinas thought it was a good thing to burn heretics.  Even better to burn them alive.

Any deviation from the current orthodoxy line could be judged as heretical.

Here are few things you could lose your head over:

Allowing women to preach – 12th century (and in some churches today!).

Refusing to take oaths or make a pledge (The Waldensians of the 12th century – and some people today).

Translating the Bible into common languages.

Baptizing adults instead of children.

Believing/teaching that the earth revolves around the sun.

The punishments for heretical thinking varied:  Yes, there was the traditional beheading. But there were some more creative methods that would make some politicians proud:

*The Judas Chair:  The “heretic” would be placed in a harness and lowered onto a pyramid-shaped seat, with the point inserted into their anus or vagina, then very slowly lowered by ropes. The torture might last a few hours or a few days.   More often than not, the victim died of infection.

*Drowning-especially for Anabaptist for their views on baptism.

*Some had their mouths stuffed with gun-powder which was then ignited.

*Children were killed in front of their parents.

All in the name of Jesus.

All in the name of Jesus.

When Jesus describes the final judgment scene he doesn’t include questions on belief.  Nothing  about inerrancy, the Trinity, or atonement theory. His concern is how theology translates into how we treat people.

Theology matters.  I get that.  But how do we tell the difference between good theology and bad theology?

The King of Jordan admitted that there are heresy hunters in Islam — yep, we know them – jihadist, ISIS.

What does that say about the heresy hunters in Christianity?

Until I was 10 years old, I had a speech impediment.  There were some letters I just couldn’t pronounce. The impediment resurfaces every once in awhile. It can be a bit embarrassing while teaching.  If you ask me to say “shibboleth,” I may not say it right.

According to some, I don’t “believe” right.

That’s ok.
It’s still my desire to live in each moment.  To hear in each moment the voice of Jesus say, “Well done, good and trustworthy servant…”